Dead Presidents and others meet in the Whitehouse Oval Office to discuss their demise, events from the past and present. Thomas Jefferson' spirit speaks for the 56 founders and signors of The Declaration of Independence. President John F.Kennedy proceeds over the meeting with Abraham Lincoln, Andrew Jackson, Ronald Reagan, Woodrow Wilson and other distinguished spirits. 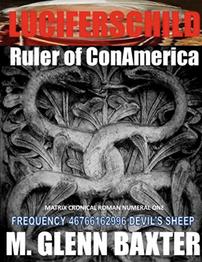 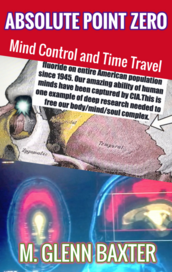 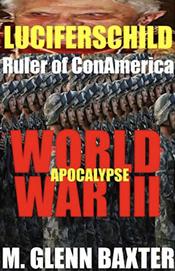 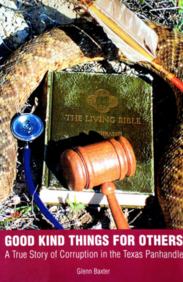 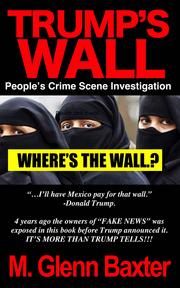 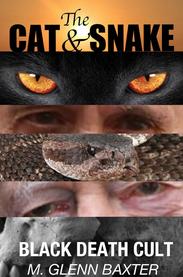 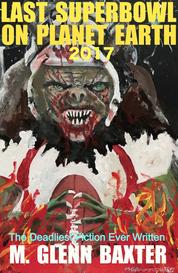 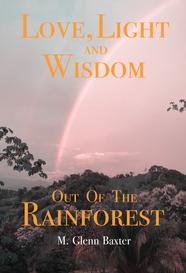 CLICK HERE to listen to one of the chapters. 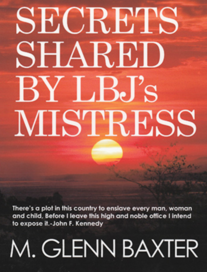 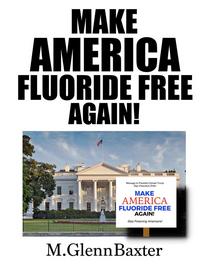 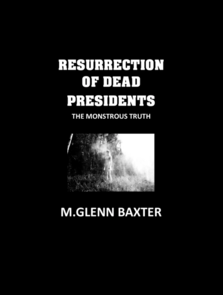 Click on book cover to read more about each book. Thanks!!!

GOOD KIND THINGS FOR OTHERS

Author's first book published in 2006 is about public corruption in the name of Jesus. District Attorneys who are drunk on power and greed. One arrested by FBI for cocaine possession and another arrested for DUI hit and run. Doctors who are blackmailed by Hospital Administrator when they expose the Hospital CFO's child pornogrphy. A must read for those who want to stand up against child pedophiles and put them in prison.

M. Glenn Baxter after over 40 years reveals the secret told to him by Madeleine Duncan Brown, the mistress of President Lyndon Baines Johnson for 21 years. He shares experiences in the advertising business in Dallas when sex was rampant, oil was power, the underworld was a way of doing business, politics were ruthlessly run by sociopaths and the Texas elite controlled the world.

Out of The Rainforest

America has become an unbalanced, unnatural, insane nation home of Lucifer Satan. The author living out of a natural rainforest serves readers pure, natural balanced power of Oneness in The Absolute Creative Light force of His love for all children and life on this intricately designed Eden on Planet Earth. Miracles come to those living in nature.

America has been dumped for China leading toward World War III. Wake up Americans to know that your One World Order Congressmen and Senators supported by Nazi George Soros Rothschild Bankers have dumped your country for China. They have allowed China to buy up America. The Bush Clinton Nazi Crime family have already invested in Mainland China and deserted all conservative and liberal gentiles in America into the hands of ISIS Jihadist worshiping the Talmud.

It's been 4 years since Trump said in a Campaign promise..."I'll have Mexico pay for that wall." Trump has never revealed why both Democrat and Republican politicians were against the wall. The reason and facts are in this book. This book revealed FAKE NEWS before Trump announced it. The President has never revealed to American public who owns the mainstream news since 1800's. ALERT!!! Jury is out waiting to see if Trump will destroy deep state and prosecute the world's child traffickers.

Self-Published Author Not a New York Times Best Seller Because Parasites Cannot Handle The Truth Nor Make It into a Hollywood Movie.

Fluoride was used in Nazi Concentration Camps! In the book "FLUORIDE THE DEVILS POISON",

Hitler had tons of fluoride at each concentration camp.
This book contains a marketing warfare community action plan with facts and public relations tools to assist Americans in eliminating poisonous fluoride from small communities and large cities. Now the time for American people to stand up to this atrocity. 144 cities in America had already banned fluoride from municipal drinking water.

No other non-fiction novel dares to tell this story of the true hidden Origin of the Vatican.  A conspiracy going beyond millions of years exposing how humanity is enslaved through symbols, numerology, astrology, black occult magic and dogma. Hidden secrets about lies in history and twist in biblical scripture never revealed in establishment government controlled alternative media like GAIA.

Researched and written from 1983 de-classified files of CIA U.S. Army Intelligence and Security Command, Fort George G. Meade Maryland. Shocking truth about the U.S. government has withheld documented proof of (God) an Supernatural Creator of the Universe and the self healing powers in every human intelligently designed. University level knowledge. Suggested reading The CAT&SNAKE Black Death Cult as preparatory level.

The deadliest fiction ever written about worldwide annihilation of billions of people on the sidelines - with no helmets, pads, or spiritual defense against the Red Dragon. In the future, weather will destroy the world. It will not be manmade. It will come from the Wrath of God.

Author's note: This book is NOT fiction. It is based on actual events that normal minds cannot fathom. It'swritten to appeal to a younger audience.